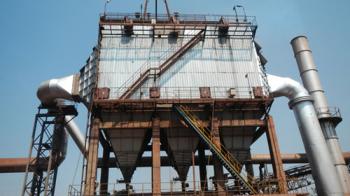 The essence of any retrofitting job is the pace at which the job is executed where project time is of utmost importance to the project.

A customer in Karnataka had to retrofit their ESP which was not performing satisfactorily. The customer after witnessing the vast expertise in project execution on Indian and overseas projects awarded the project to ECOMAK. The company took up yet another challenge of retrofitting the ESP in flat 30 days from receipt of purchase order to re-commissioning of retro-fitted ESP. The customer had demanded a emission guarantee of 100 mgm/Nm3(max). ECOMAK demonstrated an emission of less than 50 mgm/Nm3 on continued basis. Ecomak is very efficient when it comes to site activities. We support your project from planning & designing till erection & commissioning stage. Experienced and well-trained engineers will help you install and commission your equipment at site.

One of Its Kind Venturi Ecoscrubber On Petcoke Kiln 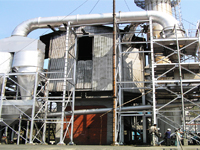 A customer in Assam was facing a problem of air pollution at their plant. The company is one of the largest producers of Petcoke in India. The plant is situated in a remote location near a forest which was enriched with wildlife and natural resources on the banks of the Brahmaputra River. The customer is very serious when it comes to preservation of natural resources and asked ECOMAK to provide a viable solution for their problem.

Conventionally, a baghouse system or an Electrostatic precipitator is provided at the kiln exhaust. Ecomak team first surveyed the area and found out that there was abundance of water available. To take advantage of this situation, ECOMAK supplied a Venturi Scrubber instead of any conventional system. This system on petcoke calcination is a first of a kind system in India. 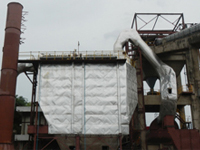 An Indian conglomerate had purchased a cement plant in Vishakapatnam, Andhra Pradesh. This plant had a non-performing ESP on a slag-dryer. The customer placed an order on ECOMAK to convert the ESP into a baghouse. Since, this was a fast track project the customer enrusted ECOMAK to deliver the project within a limited time-frame. 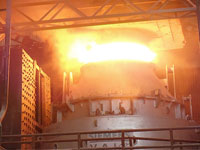 A company in Boisar, Maharashtra who is the second largest manufacturer of stainless steel long products and is ranked number one in stainless steel flanges in the world, had placed an order in 2011 for an air pollution control plant on ECOMAK, for a 60T AOD converter supplied by Siemens VAI. This AOD convertor is the largest AOD convertor in the Indian private sector.

The plant equipment consists of a two-stage cooling system followed by off line pulse jet baghouse system. The system consists of water cooled ducting, air cooled ducts, forced draft cooler, dilution damper, Pulse jet Bag filter, centrifugal fan and chimney. Due to dry system, dust recycling process is simplified significantly. Also the temperature of the gas which is initially around 1500 deg C is cooled down to 150 deg C before it enters the baghouse. This dry-type fume extraction system is installed to clean the gas from the converter and is operational since February 2012.